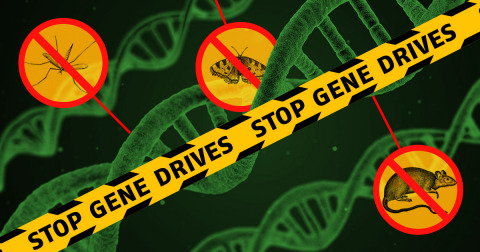 The results are here: This first opinion poll on Gene Drives shows that a majority of citizens from 8 EU countries oppose the idea of using the technology in nature because they consider the risks of such experiments to be too high. The technology can be used to genetically modify or eradicate wild species.

A large majority of respondents (65%-82%) agree that environmental releases of gene drive organisms should be postponed until there is scientific proof that their release would not harm biodiversity, human health, agriculture or peace.

A similar majority (61% - 85%) agrees that the authorisation of environmental releases of gene drive organisms that could spread globally should require a global consensus.

The survey amongst nearly 9.000 people is representative of 280 million EU citizens. It was commissioned by nine NGOs demanding an informed and inclusive public debate and a global moratorium on the environmental release of this new type of genetically modified organisms.

“Europeans are seriously sceptical about genetically engineering wild species with Gene Drives. The results of the poll send a clear message to the European Commission: we need global consensus before any one scientist or country is allowed to release Gene Drive Organisms into nature.  Launching this now would be madness, because it could change the genetic makeup and features of species forever or drive them into extinction. We need a proper public debate that involves people in the risks of genetically modifying wild populations or entire species before anything happens.” Laura Sullivan- WeMove Europe

What are Gene Drives?

The so-called Gene Drive technology is a method of genetic engineering, enabled by CRISPR/Cas. Gene Drives are designed to either replace wild populations or species, such as mosquitos or rats, with genetically engineered organisms (GMOs) or to eradicate them completely. The application of gene drives in nature would mean a paradigm shift in genetic engineering: from controllable and containable agricultural crops to redesigning entire ecosystems. Some scientists are convinced that gene drive technology could be a potential solution to various challenges such as diseases, invasive species, or agricultural pests. A research consortium funded by the Bill and Melinda Gates Foundation is currently planning first environmental field trials with gene drive engineered mosquitos in Burkina Faso, to see whether the technology can deliver the promised benefit of eradicating the anopheles mosquito.

The problem? Many scientists warn that such environmental releases could have possible grave and even irreversible consequences for ecosystems, biodiversity, human health, agricultural systems or peace. They predict that once released, gene drive organisms may be difficult to control or to retrieve, may spread globally and could permanently harm ecosystems.