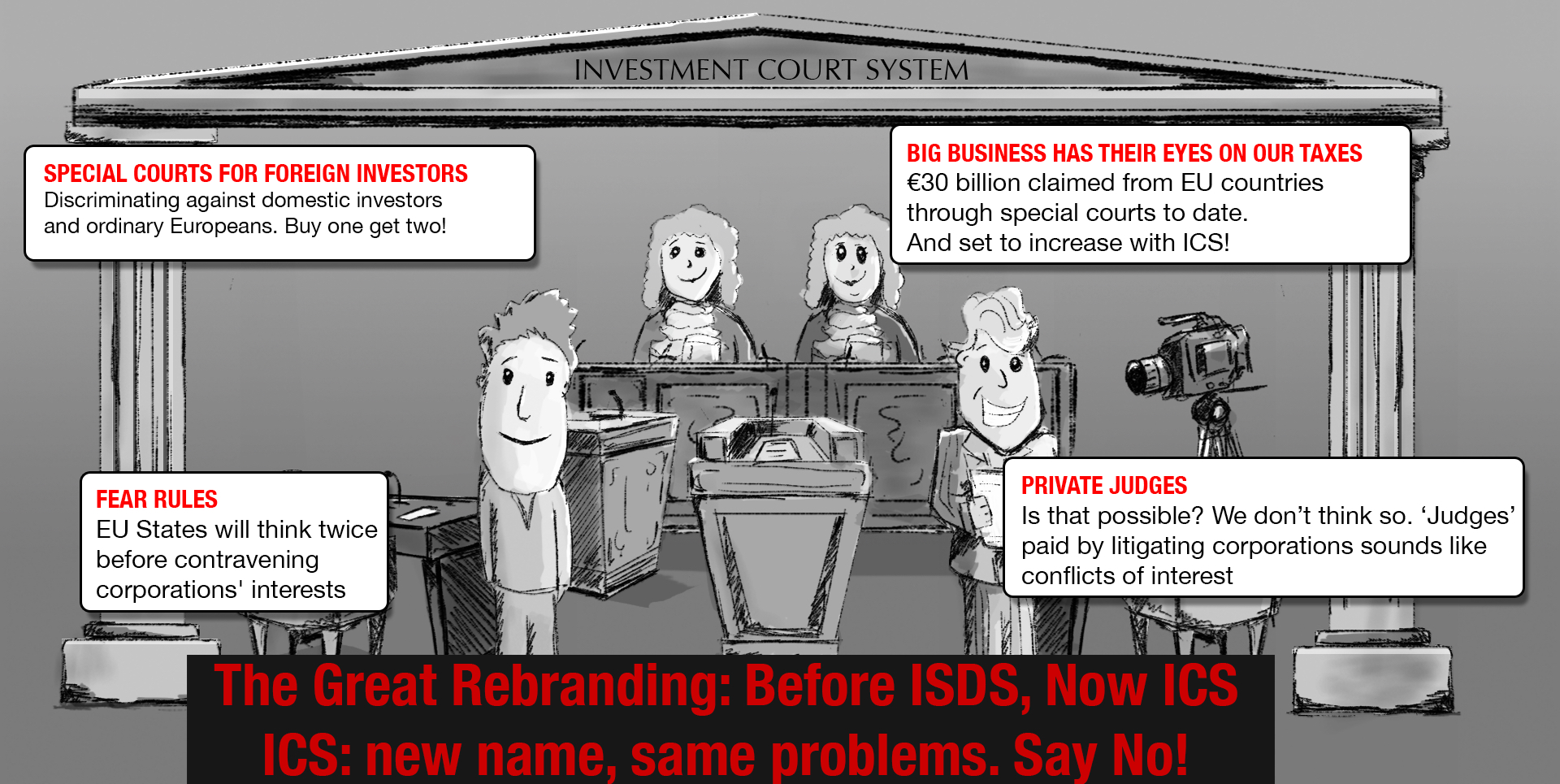 The Transatlantic Trade and Partnership Agreement (TTIP) between the US and the EU, and of the Comprehensive Economic Trade Agreement (CETA) between Canada and the EU are trade agreements that are being negotiated right now.

The aim is to increase trade but all the benefits are for corporations and the risks are for citizens. Nothing is signed yet so we still have time to act to protect our rights. Learn more about TTIP and CETA https://stop-ttip.org/what-is-the-problem-ttip-ceta

2) Why would businesses be allowed to sue European states and claim public money?

The European Commission (EC) is working on various trade agreements between the EU and other parts of the world.

The EC is so keen on the trading idea that it is ready to be very flexible - flexible to the point of giving up the right of EU countries to make decisions in the public interest. The EC is proposing a system of special private courts* that foreign** businesses can resort to to sue EU countries if their investments there didn’t yield the expected profits, and if they consider this was a result of public policies excessively protecting Europeans and the environment.

* The technical name is Investor - State Dispute Mechanism or ISDS

** US and Canadian in the above cases

3) What is the difference between ISDS and ICS?

According to a wide array of trade experts in European civil society [ref], very little. Following much uproar from Europeans, the Investor - State Dispute Mechanism (ISDS) was replaced with the Investment Court System (ICS) last September. The core problem with this ICS proposal is that it still contains the idea of a judiciary system that is parallel to our public courts system, and that is only available to some people: foreign investors and businesses.

The Commission argues that in these special courts there’ll be some transparency in cases brought by businesses against EU countries, and that ‘judges’ will be ‘of public career’. However, the prospect of being able to scrutinize cases is of little relief because we know such ‘judges’ will be private lawyers that will be paid by the litigating party (i.e. the big foreign business).

If these “judges” are paid by the big corporations every time they work on a case it is in their interest to run as many cases as possible. That's exactly what differentiates an independent court from a biased one.

4) Who in the European Union is being consulted on this?

In September 2015 EU countries were asked by the European Commission to position themselves on the ‘new’ proposal for special private courts. The European Parliament is also consulted. Also, in 2014, the Commission ran a public consultation: nearly 150,000 Europeans filled it in, 97% of which rejected any kind of special court of foreign businesses, whether it’s called ISDS or ICS.

5) €30 billion have already been claimed from EU countries by corporations? What does this mean?

Until October 2015, investors and businesses have already claimed at least 30 billion Euros in compensation from EU countries through special private courts (technically called ISDS mechanisms). EU governments have already been forced to pay out upwards of €3.5 billion, with the rest being still unclear as the cases are yet to be concluded.

These claims have been possible because ISDS courts were included in other trade treaties the EU signed up to in the past. The inclusion of ISDS in TTIP, CETA and other upcoming trade treaties will increase the amount of cases brought by businesses against EU countries, as well as the quantity of the claims, with EU taxpayers footing the bill.