The ongoing negotiations of the EU-US trade agreement, known as the Transatlantic Trade and Investment Partnership (TTIP), are happening behind closed doors, hand in hand with big business lobby groups. Their influence is so great that their collaboration with TTIP negotiators deserves closer scrutiny. Our contribution: to give the most successful business group in hijacking TTIP for corporations an award!

After more than 45 thousands of us voted for the winner of the Democracy for Sale Awards, we went all out and in a glittery mock Awards ceremony, where we presented the undisputed winner: the pesticides lobby, represented by huge corporate lobbying groups ECPA and CLA. Take a look at what happened in the ceremony in this 1,5 min video!

CETA: winning one step at a time 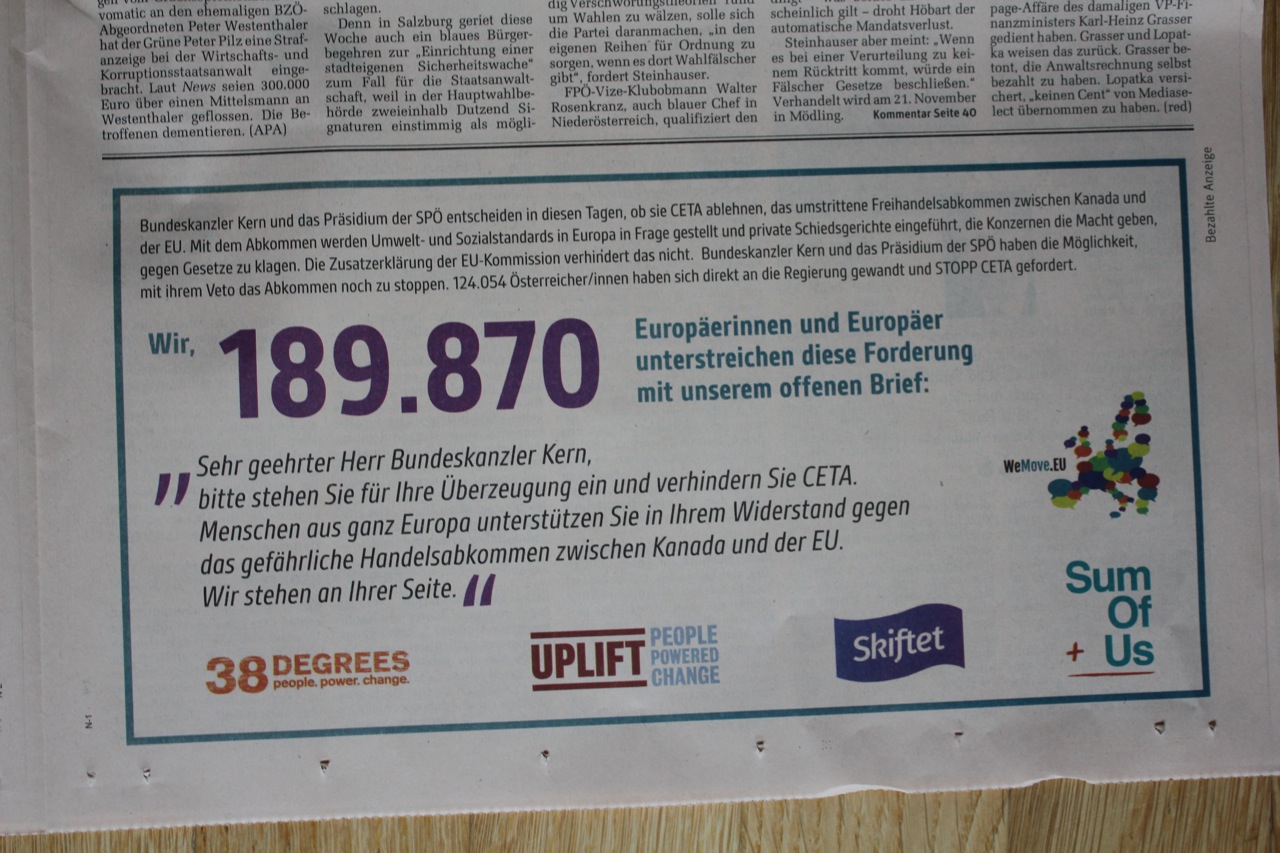 CETA, the trade deal being negotiated between Canada and the EU, threatens democracy. The dangerous deal would mean the creation of special tribunals where corporations would be able to sue our governments for public money. Tackling a treaty of these enormous dimensions requires long-term work, but we haven’t shied away from it. First, back in the spring, we mobilised more than 350,000 Europeans in just five days. The European Commission listened and confirmed that the parliaments of EU countries will have the opportunity to ratify the controversial trade deal.

Then, in autumn, we launched a huge people-powered open-letter to persuade the Austrian Chancellor to veto the deal and the letter was published in Austria’s biggest newspaper, Der Standard. We also launched a petition to support the opposition of Wallonia to CETA, which collected almost 100.000 signatures in just a couple of days.

And even though the deal has been signed, we have managed to give a big blow to the system of special tribunal for corporations. Even better, CETA can still be stopped by a vote in the European Parliament or by any of the member states' national parliaments. We will keep you updated with our new actions to defeat CETA!

For the first time in history we could have a way to internationally clamp down on corporate abuses. A new global treaty would introduce legally binding rules for corporations. But despite having support from most countries in the United Nations, EU countries have been boycotting this treaty. However, thanks to thousands of actions, nearly 92,000, the European Union has finally agreed to participate in the Intergovernmental Working Group that will discuss how to develop and implement this global treaty. This is a great success, but we will continue to monitor the behaviour of EU countries and will up the pressure next year when hard negotiations start. Stay tuned!

Polish ban on abortion: the parliament dropped the proposal! 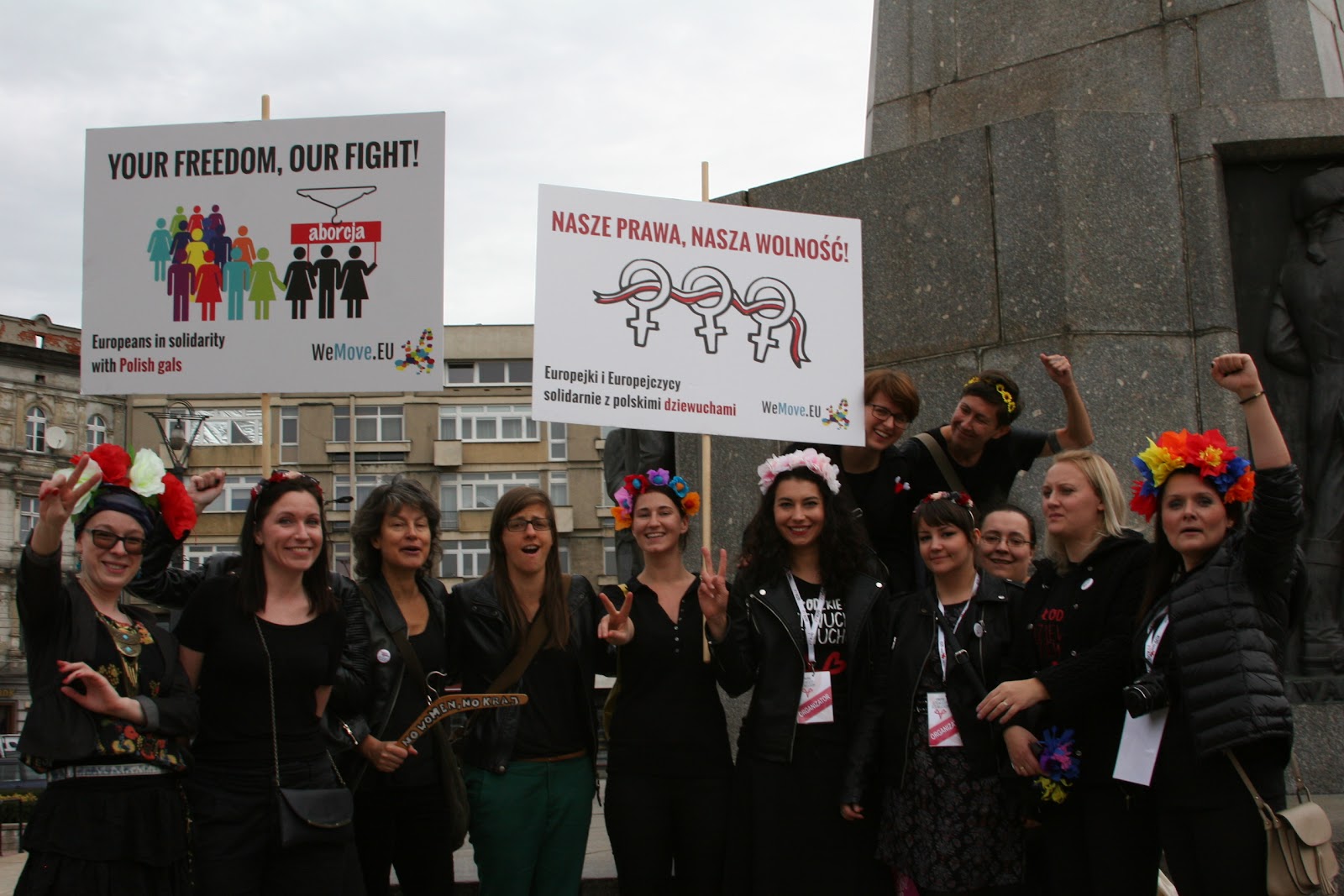 Our community came together to stand up to oppose an anti-abortion law in Poland that would have banned abortions in all circumstances, even in cases of rape. Over 83,000 Europeans signed our open letter to support Polish women’s right to choose. And together, we chipped in over €16,000 to support a Polish women’s rights group called Gals 4 Gals. After huge street protests in Poland, alongside campaigning from women’s rights groups, NGOs and charities, as well as our own campaign, the Polish parliament backed down. Can you chip in to keep defending democracy and our basic rights in Europe?

For a real reform that makes the polluters pay

Pollution is a profitable business. For the past decade powerful corporations have spared no expense to lobby behind the scenes to stop any meaningful reform of the EU carbon pricing policy. The law is now up for review in the European Parliament but so far, things does not seem to be heading in the right direction. Recently, the EP Industry Committee voted in favour of big polluters rather than an efficient reform. But we're not defeated and will keep up the pressure on European policymakers. Now that the Environment Committee in the European Parliament is holding a vote in December, every signature matters SIGN now! 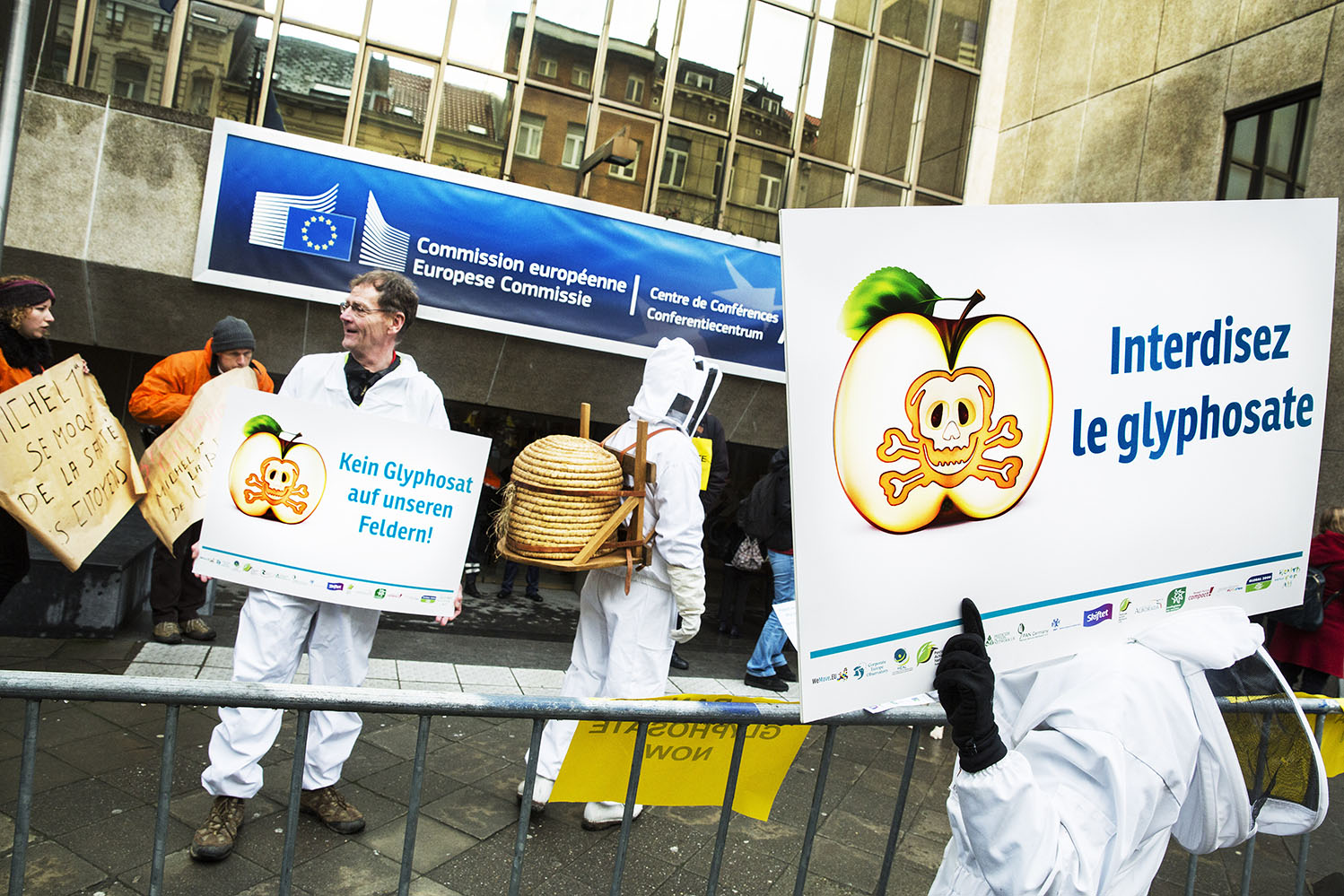 We’ve been working to free Europe from the carcinogenic weed killer glyphosate for many months. With huge support from our partners, we’ve lain the groundwork for the EU to ban glyphosate. In July, the Commission decided not to give this substance the 15 year approval that big corporation Monsanto so desperately wanted. Instead, the EU granted a 18-month extension, pending scientific review. Let’s now increase the pressure on the Commission to ban glyphosate forever. Sign the petition!

For a peaceful world

The European Commission, under heavy pressure from the arms industry, is advocating for a EU budget of thousands of millions of public money destined to develop advanced military technology, for the first time since the Union exists. The goal of these subsidies is to preserve the competitiveness of the arms industry and its capacity to export abroad, including to countries taking part in deadly conflicts. And this is just the beginning, the long-term objective is to set up a programme worth 3.5 billion of euros. This will mean cuts to the detriment of other spending priorities.

But we have a chance to avoid European tax payers paying to fuel war and conflict. Tell Members of the European Parliament and the European Council we want them to vote for peace and not to subsidize weapons. Join the movement now!

Goldman Sachs, a banking corporation with a central role in causing the 2008 financial crisis, just found an easy way to make sure the Union operates in its interests. It’s hiring the ex-president of the European Commission, Mr Barroso. Barroso gained great political influence, contacts and insider know-how through his public post, all of which he could now use to benefit one of the most controversial financial corporations. This is a clear signal that our European institutions allow banks and big businesses to set the agenda. A big community of Europeans shouting with one voice will surely help to kick it into action. In few days tens of thousands have taken action. Sign to stop ex-politicians selling their influence to corporations!

Ending the criminalisation of humanitarian work

Governments across Europe have fallen seriously short in their efforts to provide aid and dignified reception to some of the world’s most vulnerable people arriving to Europe’s shores. So Europeans across the continent have stepped in to offer vital humanitarian assistance to those who desperately need it.

Manuel, Enrique and Julio are three Spanish firemen who did just that, and were arrested for human smuggling - click here to watch the video where the firemen explain the situation. The legislation which allowed for their arrested for human smuggling is being revised by the European Commission right now. Over 4000 people took part to the Commission’s public consultation on the topic which ended in April 2016, and over 133,000 have signed demanding the Commission push for a serious change in this legislation, ensuring no humanitarian worker can be charged for acts of humanity.

Now we are foucusing our efforts in a particular demand addressed to the EU Commissioner for Migration: a change in the Facilitation Directive to ensure Europe’s unsung heros are treated with the dignity they deserve and not criminalised for offering humanitarian assistance. Your signature will help increase the pressure!

Turkey: The EU must act!

In a wildly disproportionate reaction against the instigators of the attempted military coup d’etat in July 2016, Turkey’s president Erdoğan seized the opportunity to launch a wide-scale attack on democracy and the rule of law. More than 130,000 joined our call to suspend all accession negotiations with the Turkish administration, and in September we drove some flashy bikes displaying our message in Bratislava, where the European Council was meeting. Unfortunately, the current Turkish government continues to promote human rights violations and the rule of law is not yet upheld in Turkey. WeMove Europe will keep monitoring the situation and will act when we are need.